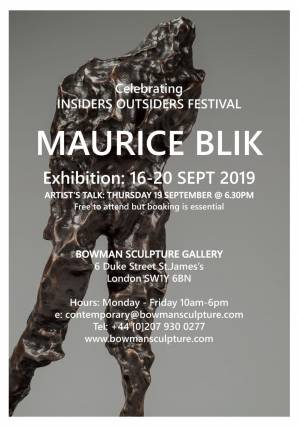 We are delighted to announce an exhibition and talk by Maurice Blik to coincide with the Insiders Outsiders Festival.

The exhibition, taking place at Bowman Sculpture Gallery, London, will open on 16 September and run for five days, with a talk by Maurice Blik on Thursday 19 September at 6.30 pm.

This event is free to attend, but please contact Bowman Sculpture to book your place or for further information about the exhibition. 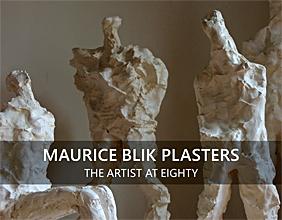 21 April 2019. An exhibition of plasters of recent work to celebrate the artist's eightieth Birthday. Only one plaster of each sculpture will be available for sale. The exhibition will also include original sketches and limited edition etchings.

Exhibition ends 11 May. Open Saturdays 11am-4pm and by arrangement. 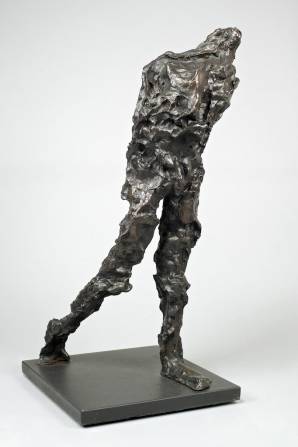 There will be a Private View on 12th April. If you would like to attend the PV please contact the gallery directly.

The exhibition will feature a series of figurative bronzes which represent an exciting new direction for the artist. 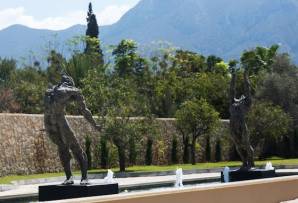 The two sculptures are currently on display in the courtyard of the Arkin Group's newly opened University of the Arts (ARUCAD) and will subsequently be moved to their permanent home on the clock tower of the Group's new Head Office. 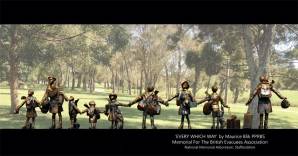 Dedication of 'Every Which Way' Memorial

A memorial to commemorate the British Evacuees Association (BEA) was officially unveiled at a Dedication Ceremony held at the National Memorial Arboretum, Staffordshire, on 25th July 2017.

The Ceremony was attended by around 500 people, including many members of the BEA. The Guest of Honour was His Royal Highness The Duke of Gloucester.

It was a fantastically memorable day for everyone involved and marks the end of a long journey for the BEA, their many thousands of members and for Maurice Blik who was commissioned to make the memorial. 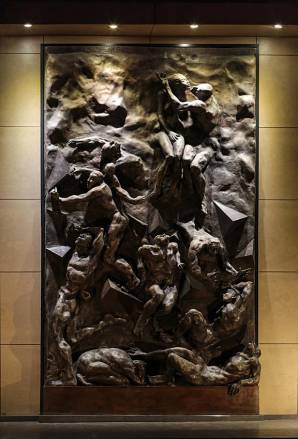 For Love of Cyprus

The Arkin Colony Hotel in Kyrenia, Cyprus have commissioned Maurice Blik to create a unique bronze relief panel, 6 metres tall, to be erected on the side of their new flagship head-offices being built next to the hotel.

The title of the work is 'For Love of Cyprus'. It conveys the turmoil and history of the region through a series of monumental figurative sculptures, culminating in a couple at the top of the panel intended to symbolize unity.

This will be the largest bronze sculpture to date undertaken by Maurice Blik.

Work on the sculpture is now under way and is expected to take around 12 months to complete.

It is hoped that the sculpture, once installed, will generate interaction with visitors and tourists to this stunning part of Cyprus. 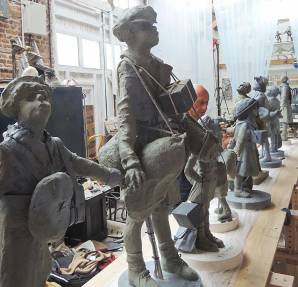 A 4.5 metre-long memorial commissioned by the British Evacuees Association is in the final stages of completion.

The sculpture by Maurice Blik has been cast in bronze at the Milwyn Foundry, Leatherhead, UK and is now awaiting its granite plinth, being constructed by Seven Seas Marble in Essex.

The completed sculpture depicting a long line of children holding hands, weighed down by their luggage and gas masks, will be installed at the National Memorial Arboretum, Staffordshire, in July 2017.


Image: The artist in his studio adding the final details to the sculpture prior to casting. 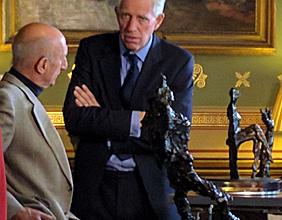 A special edition of the Antiques Roadshow, looking at artefacts from the Holocaust and exploring the extraordinary stories behind them will air on Sun 15 Jan 2017 on BBC 1 at 8pm. It will include footage from interviews conducted by Natasha Kaplinsky of a number of British Holocaust survivors, including Maurice Blik and a selection of his bronze sculptures. 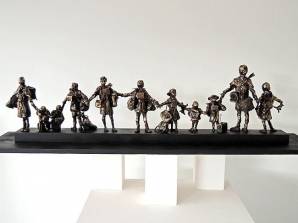 Work on the long-awaited National Memorial to the evacuation of children from British cities during WW2 is now under way.

The Memorial, entitled 'Every Which Way' has been commissioned by the British Evacuees Association and will be sited at the National Memorial Arboretum, Staffordshire.

The sculpture depicting 11 children holding hands is now well advanced and is due to be cast in early Spring 2017. The finished memorial will be 4.5 metres wide. 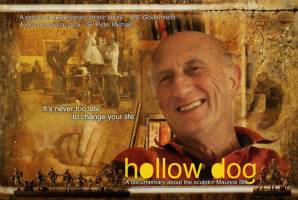 A documentary film by Clive Martin about the life and work of Maurice Blik - an inspiring story of survival - was completed by Yamedia in 2016.

The film was given a private screening in London's Leicester Square in July 2016, and is subsequently being shown at various worldwide film festivals. 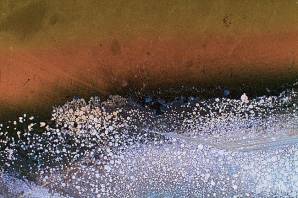 Studio open from 10am - 5.30pm. Light refreshments will be served all day.All welcome.

Image: 'Source' limited edition photographic print, signed and editioned by the artist. One of a series new prints inspired by found textures.

The 'Source' series of prints will also be exhibited at The Affordable Art Fair, Battersea from 21-25 October 2015.

A short video showcasing some of Maurice Blik's key external sculptures in the UK has been produced by film maker Clive A Martin. The video captures four of Maurice Blik's most significant commissions to date: 'Renaissance'; 'Behold'; 'At First Light'; and 'Second Breath'. View Maurice Blik video. 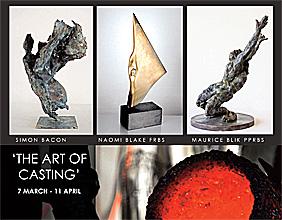 'The Art of Casting'

A selection of figurative bronzes by Maurice Blik will be exhibited at Sculpt Gallery from March - April 2015, alongside bronzes by Naomi Blake FRBS and Simon Bacon.

The Art of Casting will focus on sculptural process and materials. The exhibition will be accompanied by a short video demonstrating the traditional 'lost wax' method of casting bronze, courtesey of Bronze Age Foundry, London. 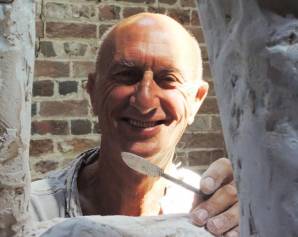 Open for two weekends in September - an opportunity to glimpse the artist's studio and work in progress. 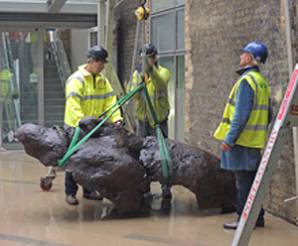 A commission for P&O entitled 'About Face', by Maurice Blik, is currently being installed in the courtyard of the Stable Studios at Regent's Quarter development, Kings Cross, London, by BAM Construction. The two-part bronze sculpture depicts a weathered male head looking up from the ground towards a gold-leafed portrait of a female on the opposite wall.

The ravaged male head symbolises the past heavy industry and physical labour of the area, whilst the serene, golden female head conveys aspiration and gazes towards the future.

The buildings will be occupied by MacMillan Publishing Company. 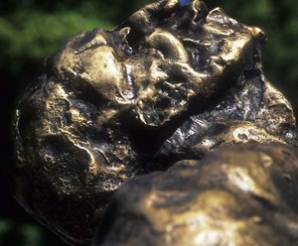 'Into the Light' is a retrospective, solo exhibition - the first comprehensive exhibition of sculpture by Maurice Blik for many years. The exhibition includes many of his bronzes from the '80s and '90s and showcases his transition to lighter bronze patinas in recent work. 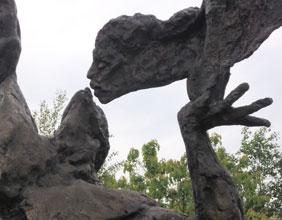 Three monumental sculptures by Maurice Blik are being exhibited in the gardens at Woburn Abbey in this year's Artbeat 2012 taking place from April 6 - August 31. They include 'Renaissance' - the original bronze of which is sited at East India Dock, London.

Woburn Artbeat is an annual project now entering its third year. It promotes high quality, original art with a prominent sculpture exhibition set in the secure 36 acre gardens at Woburn Abbey - belonging to The Duke and Duchess of Bedford.