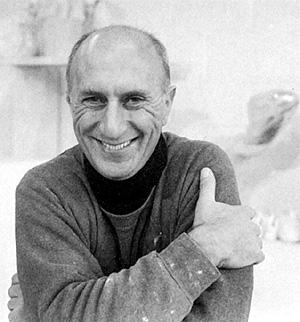 Born in Amsterdam in 1939, by the age of four Maurice Blik was face to face with the questions and choices that philosophers, artists and religions have left unanswered.

Maurice Blik has lived in England since being liberated from Bergen Belsen, where he was taken as a small child from his birthplace, Amsterdam. The ability to come to terms with this experience and to confront the face of humanity that he had witnessed, stayed silent in his life for some forty years. It finally found a voice in the passionate and exquisite sculpture which began to emerge in the late 1980s when he created a series of horses' heads. These noble and benevolent creatures posses an energy and a life force that seem just barely harnessed long enough to take their shape in the clay itself. Later he progressed to more figurative work in which the irrepressible joy of life and the destructive, inpenetrable shadow of existence, are held together in a struggling unity.

Maurice Blik has had an extensive career in Art Education, teaching at all levels from Primary to Post Graduate. In the 1980s he began to develop his own artwork and in 1991 gave up teaching to work full time on sculpture. He has a post-graduate Art Teacher's Certificate with Distinction from London University. In 1996 he was elected President of the Royal Society of British Sculptors and is a Fellow of the Royal Society of Arts.

Maurice Blik works in the UK and USA where he was awarded residency by the US Government as 'a person of extraordinary artistic ability'.